The AJS-37 Viggen is a Swedish double-delta supersonic attack aircraft from the late Cold War. It was the backbone of the Swedish Air Force during the Cold war, serving as the main attack and anti-ship platform. The AJS is the 90�s upgrade of this 70's era aircraft, adding several advanced weapons and systems functionalities. The aircraft was designed around the pilot, with an excellent man-machine interface, supporting the pilot through the smart use of autopilot systems, radar and HUD symbology in order to deliver the ordnance onto targets from treetop level with high speed attack runs.

The aircraft is armed with multiple weapon systems ranging from programmable stand-off weapons such as the RB-15F antiship missile to the BK90 Cluster munitions dispenser to various bombs, rockets and missiles for a wide range of target types. The aircraft can also carry gun pods and the Sidewinder series of infrared-guided missiles for air defence and self-protection purposes. Developed in the years immediately following World War II, the MiG-15bis was a first-generation jet fighter designed by the Mikoyan-Gurevich design bureau of the Soviet Union.

The MiG-15bis is a single engine, swept-wing jet that saw over 15,000 copies produced. The MiG-15 gained fame in the skies over Korea where it battled the F-86 Sabre and other allied aircraft. It proved an excellent match to the Sabre, and it often came down to the skill of the pilot that determined who made it home and who was left dangling from a parachute.

Having an excellent thrust-to-weight ratio and good climbing characteristics, the MiG-15bis was also armed with two NR-23 23mm cannons and a single, powerful N-37 37mm cannon. Not surprisingly, it is considered by many as one of the deadliest fighters of the era.

The MiG-15bis model featured in the simulation is an upgraded model from the original, powered by the more powerful Soviet-produced VK-1 engine in place of the original British Rolls Royce Nene-I (II).

DCS: Mi-8MTV2 Magnificent Eight is a highly realistic PC simulation of the Mi-8MTV2, a combat transport and fire support helicopter and an upgraded variant of one of the most widely produced helicopters in the world - the Russian Mi-8 (NATO reporting name �Hip�). Having serving in over 50 countries in a wide variety of models over the past 40 years, the Mi-8 is a revered veteran of countless military operations and civilian services around the world. 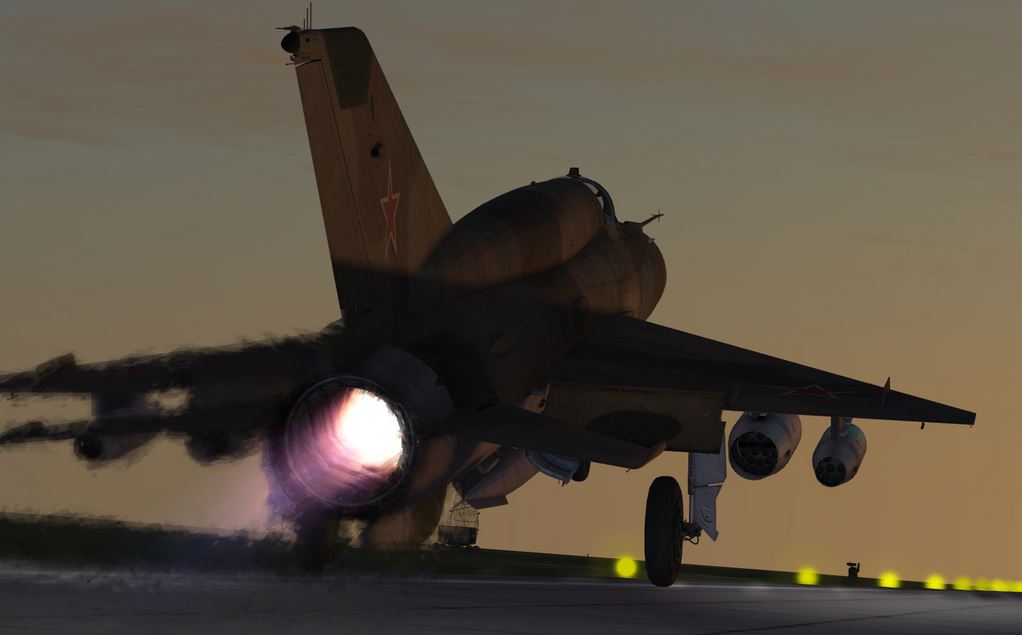 The MiG-21bis is a delta wing, supersonic, fighter-interceptor jet aircraft. Much like the AK-47 became the everyman's rifle, the MiG-21 has been operated by more than 40 countries worldwide, and has enjoyed the longest production run of any modern jet fighter to date. The MiG-21, in all of its variants, has fought in wars stretching all the way from the Vietnam War in the 1960's to the modern day Syrian Civil War. Owing to its unique blend of versatility, ruggedness and maintainability, the MiG-21 remains in active service to this very day.

Leatherneck Simulations' recreation of the MiG-21 is, by far, the most accurate and comprehensive simulation of this supersonic jet fighter to date. The fully simulated systems, interactive cockpit, advanced flight modeling and incredible graphical fidelity come together to create a package that will provide you with the most authentic simulation possible. So strap in, and get ready to experience the rebirth of a legend. The UH-1 Iroquois, better known as the Huey, is one of the most iconic helicopters in the world. Indispensable in the Vietnam War, the Huey continues to serve in both military and civilian roles around the globe today. DCS: UH-1H features an updated model of the helicopter armed with rockets, gatling guns, and door gunner machine guns.

The simulation offers both extreme realism in its flight and systems modeling as well as a variety of options to reduce the learning curve for new players, including an Easy flight mode. DCS: UH-1H provides multiple player positions, including pilot, co-pilot, and door gunners. A handcrafted storyline campaign is included as well as a number of single missions and a training course.

The SA342 Gazelle is a light scout/attack and transport helicopter. It was introduced in 1968 as a result of cooperation between A�rospatiale and Westland Aircraft. Operated by 23 countries, the Gazelle has served in combat operations across the world including the 1991 Gulf War, 1982 Lebanon War, Syria, and other conflicts. The Gazelle is powered by a single turbine engine that is connected to three glass-fiber reinforced plastic main rotor blades with a bearingless main rotor developed by B�lkow GmbH. It is also the first helicopter which features the famous Fenestron tail rotor.