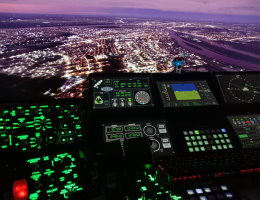 Gibraltar Recce. Gibraltar Airbase, 1952, 0730 hrs. I actually flew the route at 0800 to get better lighting for the screenshots. Try it at the earlier time, it's more fun!

These screenshots were taken in Microsoft Flight Simulator 2002 at Gibraltar AB.

Here's a fun mission that takes only 15 minutes to fly using Microsoft Flight Simulator 2002. You can fly the whole mission with one eye on the compass heading and one eye (and your camera) out the cockpit window.

The leg between B and C is through some winding valleys and will test your nerve at 200 feet! Don't forget to turn Terrain Mesh complexity to 100 %.

First flown in 1949, the Canberra was the RAF's first axial-jet aircraft. Its superb low-level agility belied its bomber role.

A large relative wing area also meant it could excel as a high-level photo recon platform, which in its PR.9 form the Canberra still serves today, over 50 years in service.