Having spent some time flying Su-27 Flanker 2.0 recently I thought I'd see how Microsoft Flight Simulator 2002 rendered the Crimean peninsula.

The first notable difference was that Microsoft only offer ONE airport - Simferopol. Su-27 Flanker 2.0 models about a dozen military airbases in quite some detail.

Secondly, the cultural artifacts are nonexistent, at least I couldn't find any bridges or buildings. 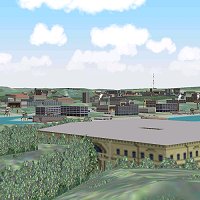 Thirdly, the terrain is modelled about about the same standard in both sims, which is to say - pretty accurately! Not that I've been to the Crimea but the landscape is detailed enough for me to easily navigate by reference ot a real pilot's navigation chart. Of course these comparisons aren't strictly fair since Microsoft Flight Simulator 2002 attempts to model the whole world and Su-27 Flanker 2.0 only one theatre.

So there you are - the Microsoft offering is ready to go for combat fans - except there are no weapons allowed. Hmmm ... there is Microsoft Combat Flight Sim 3 due out in 2002 - but that won't model fighter radar. What the heck - why reinvent the wheel!